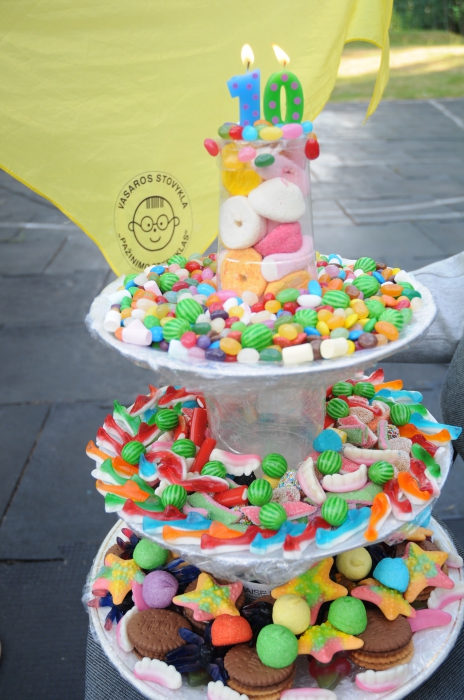 “The Miracle of Cognition” Camp - a unique project in the Baltic States has finally resumed its activities after being cancelled due to pandemic in 2020. Tenth anniversary camp took place at Giruliai district in June of 2021.

This year “The Miracle of Cognition” project as well as previous years have been supported and managed by Klaipedos Senamiesčio Rotary Club (Klaipeda Old Town Rotary Club) in cooperation with Klaipėda Eyesight Developmental Center.
Camp was cancelled due to pandemic last year so its regular guests and friends were isolated from each other for over a year. Therefore, almost 80 of them attended “The Miracle of Cognition” anniversary camp this year, with even more passion, endless happiness of seeing friends and hugging them. Camp was also attended by small group of children from Estonia.
“The Miracle of Cognition” camp is an annual event running since 2011, supported and managed by Klaipedos Senamiesčio Rotary Club (Klaipeda Old Town Rotary Club). Due to its uniqueness camp became very well-known and favourite event across Lithuania and even Baltic States including neighbour countries. All children with eyesight impairments were welcome to this camp no matter what region they are from. An anniversary camp’s program was rich of various activities and attractive events, Klaipedos Senamiesčio Rotary Club President Kristina ZIBALIENE said. She deeply felt sorry for children from other neighbour countries like Belarus, Latvia, Poland and Ukraine, who were not able to attend the camp due to pandemic restrictions. President Kristina ZIBALIENE also mentioned that children were really looking forward and hoping to see their friends from different regions, as they used to enjoy communicating with each other in different languages.
“The Miracle of Cognition” camp’s opening ceremony took place on Monday, 21st of June. Traditionally, every year the beginning of the camp and summer holiday is being solemnly announced by the Klaipėda Vyturys high-school schoolchildren`s drummer orchestra. The end of the camp’s holiday, traditionally crowned by the performance of a well-known performer of Lithuanian entertainment. This year, without sparing his precious time, DJ Jovani - Jonas NAINYS, who is also a Rotarian, came to the seaside from Vilnius. DJ Jovani made a present to children - a unique social and emotional disco where all the children, their parents, educators, volunteers and other guests were dancing all together, sang and enjoyed each other’s communion.
Beside daily going to the seaside enjoying sunbaths and swimming, the camp was full of other activities too - the campers were visited by Bikers club, which brought its own shiny and noisy horses into the camp so children could have a look at them and get ride around.
On a very next day all campers went to the swimming pool in Klaipeda town. Some of children with eyesight impairments jumped into the swimming pool for the first time in life, overcoming their fears of the water. They were supervised and taught to swim by experienced swimming athletes and members of Klaipedos Senamiesčio Rotary Club.
Campers were also visited by the crews of the Klaipėda Fire and Rescue Service Department. Beside the interesting educational program that has been performed, the overheated environment was revived with the fresh water fountains. Furthermore visitors and guests: weightlifting athletes together with coach Bronius Vyšniauskas. Eugenijus Malyshevas, the commander of the scouts, who introduced various reconnaissance ammunition, and explained about survival in extreme conditions.
Rotarian Sigita introduced an educational program for children about exotic fruits and vegetables. The children and their companions tasted many fruits and vegetables for the first time and were pleasantly surprised by such amazing variety of tastes. Andžėjus Ravanas, a blind LASS IT professional, active developer and participant of various projects, shared his personal encouraging experience in doing business. The pianist Ieva Dūdaitė-Radžiūnė pleased all campers by playing piano. A fun evening has been held by folk ensemble Curonian Saints.
Discos, educational sessions with musical instruments, song and music evenings were part of day to day activities. St. John`s bonfire was on fire in the camp. Creative workshops for children were taking place, building sandcastles, playing various games, arranging picnics, watching films adapted for the visually impaired.
Insurance of all attendees of “The Miracle of Cognition” Camp has been granted by Compensa Vienna Insurance Group. This made all campers feeling safe and confident during the camping period.
All members of Klaipedos Senamiesčio Rotary Club feeling deep gratefulness to everyone and each who contributed to “The Miracle of Cognition” camp. Such financial support and everyone`s attention were extremely important for children. Happiness sometimes lies in a simple daily things such as swimming in the pool, music’s listening, dancing or tasting delicacies. Let us be a gift to the world and to children who feels life differently than we are used to!

Participate
Who can participate?
How much does it cost?
Application form
Reminder